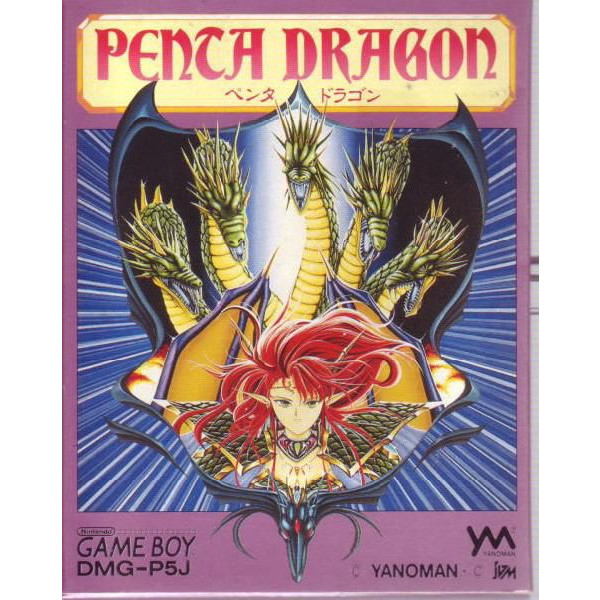 This is the highest resolution you’ll ever see the box in. Sadly, my copy came without a box so I can’t provide a scan myself…

Now, if you remember me saying that I’d go down every console generation as we approach the 500th game, this is where we end. I have no consoles beyond the NES era, where GameBoy started (even thou the game was released on 1992.) The following game is a Joker card, and it can belong into any generation. We’ve started with PS3, went to Sega Saturn and hit the PC-Engine, avoiding most popular consoles like the Super NES, Mega Drive and PS2.

Let’s talk about Penta Dragon. While the bulk of the games in my collection represent memories I have, there are games like Penta Dragon that are plunging into unknown region. I just follow That Feeling in these cases. What feeling I initially got from it was that it would be a decent, small budget game that would serve itself well on long travels. The boxart promises simple gameplay, but it also tells that some love went into this game quite a lot. The gameplay skeleton might not be anything new or polished, but you can see that it’s should be pretty good. So yeah, I can say a lot about a game just by its cover, and thus far I haven’t been wrong with my initial impression.

But quite honestly, there’s very little information about Penta Dragon in the Internet. It seems to be rather obscure, even in Japan. Penta Dragon’s sequel, TRINEA, seems to be more well known mainly for two reasons; it’s for the Super Famicom and the cover art was made by Masamune Shirow of Ghost in the Shell fame. If Penta Dragon got a sequel, then it can’t be that bad, can it?


I’ve got no idea what I’m doing here

Well, Penta Dragon’s gameplay is that of a shooting game. Third person 2D shooting game no less. Actually, I have no other game if this genre in my library, so that’s one plus in that regard as well. So, what’s it like?
Well, the controls are tight and responsive, the visuals are pretty good for ’92 GameBoy game with Dragon Quest inspired SD look on the characters except in story scenes and the music is actually pretty darn catchy. The themes I’ve managed to hear are all something I could listen while working and get a kick out of it. I’d like to hear a modern remixes of these tunes in various fashion. Perhaps I’ll dig up something from Japanese remix sites, thou that’ll take a small eternity.

The game design is actually pretty good for a low budget game. The sprites are clear, the lack of HUD is a good choice and even if the environments don’t change much it serves the whole dungeon element going on. The weapons system confused me at first, but then I realized that collecting more than one icon of the same weapon upgraded it. Also, there’s that circling shield weapon which is strong as hell, killing those mid-bosses in few seconds. There’s also a Dragon form that you can access when certain conditions are met. In this form you gain a powerful flame attack that kills a lot faster than your standard peagun. While the B-button is for shooting, the A-button is a screen clearing flash weapon, that also has a gauge in the Item Selection screen. The Level bosses, as far as I’ve seen, take most of the upper side of the screen and should pose far higher threat level.

Penta Dragon is an interesting game to say the least. It’s now very well known and most of searches for “penta” and “dragon” only offer dragons and pentagons, and sometimes some tarot crap nobody gives two cents about. ペンタドラゴン gives a bit more diverse answers, but still not much info on the game. I doubt I’ll never find a copy with the package materials and all, as the game seems to be rather forgotten and for good reasons. While the game isn’t really anything special, it’s good fun. It certainly deserves a place in the Final Five games to Five hundred. Oh, it has Penta in the name as well!

I’m pretty certain that Penta Dragon is remembered solely because of TRINEA. I’ll get TRINEA at some point (most likely in January) and check it out. But for now, I’ll keep on hammering on Penta Dragon and enjoy it the most I can… as soon as all the upcoming deadlines are over.

Even the flyer mentions Penta Dragon, not that anyone else remembers you any more…