Muv-Luv Alternative Total Eclipse aired yesterday. Koda Kumi’s song is awful. Now that we got that away, let’s discuss the episode proper (but short.) 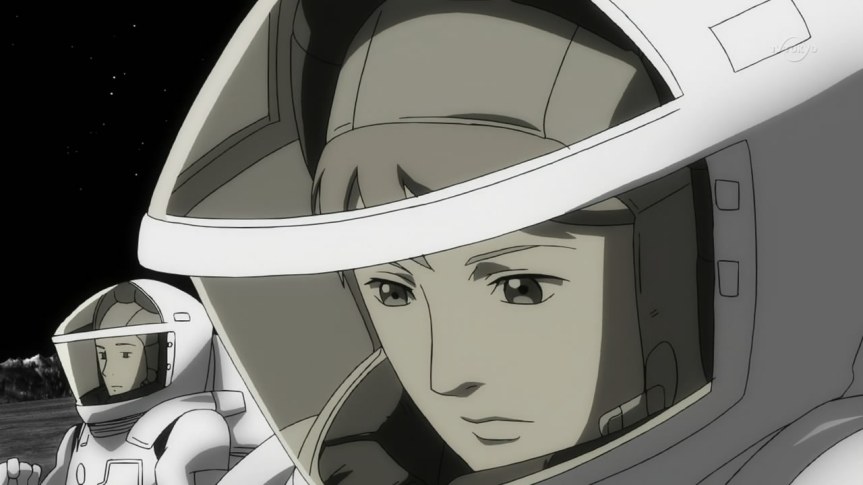 DESPERATION TOWN, POPULATION; ALL OF US

We begin the series with nice introduction to the BETA and the alternate history the BETA-verse has. The newcoming viewers are able to see the first fight that humanity waged against the BETA, and lost; the First Lunar War. We who come from the main trilogy and the light novels already know all this, but like the newcomers this is the first time we see the Lunar War. It’s quick and rather painless, but for a moment you can see that the humanity has nothing against the BETA.

After “taking” over the Moon, the BETA land to Kashgar, and the viewers are given a chart of rapid BETA expansion, as well as the coda what the story is.

This is a nice way to convey hints towards the genre shift Muv-Luv has. Soon after this scene we are met few Type-82 Zuikakus flying and landing, telling the viewer that yes; this is the world where hope burns with a dim light.

The school scenes are well thought out; we get nice exposition on surface pilots and the war against BETA in general while we get to know the current main characters. The daily bickering, playing and all is there, and we have very little hints towards what’s going on. The following scene starts with some mechanics working on Zuikaku’s head, but we pan out for some more character interaction. The news in the background give background exposition of the current world situation. There are things that are not right, the newcomer thinks. We Chickens know better, and as we wait for upcoming desperation we can enjoy the relatively happy life Yui is having.

Yui’s meeting with her uncle, and the pictures in the wall all give further hints that this is Imperial Japan, but the evidence is not yet concrete.

She is unnamed, and never called as such, but then we meet certain someone who shall become the Grand Shogun.

In war, let your objective be victory, not lengthy campaigns

Then we change for some fanservice.

While this scene is fanservice, it also provides somewhat important information how a fortified suit is put on. This is something that has not been shown before. Next minutes are spent on your normal TSF training, where we see that controlling a TSF isn’t the easiest, and the pilots are under constant stress while piloting.

These training sequences are not only service for the fans and newcomers, but also provide information how the visual information works with TSFs. The swords have the covering, but the pilots do not see them. We can deduce that the visuals given are most likely boosted to certain extent to give proper feedback to the pilot.

Cue for some more slice of life.

It’s a grim slice of life.

Fast forward 1998, when the BETA reach Japan’s shores at Kyushu. We see ships, tanks and artillery shooting towards the BETA with no effect, and the scene where the Destroyer Class charges forwards makes newcomers see the futility, and reminds the chickens of what the BETA are. The news in the following scene give a bit more exposition, and we are shown people fleeing from their homes due to government issued command. It’s a glimpse of their life, a glimpse that makes me gnaw my teeth.

Hear the earth thumping and the screech which cuts the air

It’s a defence battle. The BETA have advanced near Kyoto, and it’s our main heroines’ job as surface pilots to fight the BETA.

A glimpse but that’s enough for PTSD to kick in, and give the newcomers an uneasy feeling. Then we see two TSFs shot down by the Laser Class. Then it hits our heroine; the brutality of the war they have been born into.

I wonder when did we stop trying to count our dead? When indeed. This is the moment where Yui is face to face with the war, perhaps the first time in her life. She has seen two surface pilots shot down just like that. She knows that the fight she will most likely be her last.

And then the BETA arrive.

And Yui has becomes stern. She is filled with fighting spirit. For her country, for her friends, for those she loves. And so they go, the pilots of tomorrow to fight the battle of today.

The first episode lays a solid base for the second episode’s fight. The slice of life may be something that a hardcore mecha fan doesn’t want to see, but appreciating these scenes is important to fully enjoy what is to come. We are given a look at the normal day of a higher class citizen, and a glimpse to a commoner’s. It’s not a pretty sight after you’ve absorbed it all, as the newcomers might remember that most of Eurasia has been lost, and now Kyoto’s under attack. We’ve seen what the BETA do and how easily, be without anything special but their teeth but also what the Laser Class does. The training we’ve seen has been against another TSF, so one might wonder how is this training going to help with aliens from another world?

The newcomers might find the world a bit confusing, but the world is laid bare before them. The staff have worked within the limits they have and came out rather well. Perhaps a two episode premier would’ve been better, but at the moment it’s difficult to say. We’ll see in about a week what kind desperation await.