Guilty Gear’s an old franchise at this point. It has a slew of main series games and their updates, it has spin-offs on three different hand held consoles and it was almost replaced with another weaker franchise. Much like other fighting game franchises from the 90’s, Guilty Gear’s visual direction has changed only slightly throughout the years, for better or worse. The character designs have mostly stayed the same. 2D fighters rarely change the designs of their characters, mainly because that way they can then reuse the sprites in pretty much everywhere. Whenever characters go through under a redesign, it’s a refreshing breeze of something new while still having the same core in there. Then again, King of Fighters’ Kyo got changed from his fight style few times around, ranging from tweaks to a complete revamp. Still, changing how the characters look makes sense from the natural point of view. None of us wear the exact same set of clothes day after day unless forced.

By changing character’s clothes you don’t lose the character’s own design as long as the new clothes fit the already set look of the character. The aforementioned Kyo is a good example here, where his white jacket design fits how Kyo is portrayed. The design is slightly arrogant, bold and Kyo mostly fights in a way that it won’t get dirty. Later Kyo’s design was revised to have a black leather jacket, that looks less pompous but still has that air of arrogant bravery in there. Good changes overall. This kind of changes in character’s appearance are always good, as it gives a sense of evolution and a level of progression. Then again, the redesign can backfire horribly if not done properly.

The actual reason why the new visual direction was chosen most likely lies with the fact that the game is now in 3D, and to represent the characters properly they needed a different, more sleeker and comical style for that. In the upcoming comparisons you can see more plain areas than those with details, especially with muscles. It was also a clear intention to take the visuals towards more contemporary comic style now in Japan whilst sticking to the Guilty Gear design elements… which clash with each other to an extent. Guilty Gear always had certain sense of grittiness inspired by Heavy Metal and other Western comics, but those are absent here.

Guilty Gear Xrd is a changing point in the series, where pretty much everything is new from platform and engine to music and designs. Like it or not, Xrd always meant a changing point for the series ever since they started running the XX mill. This is a good thing overall, as the series has been on hiatus a bit too long and it needs to attract attention outside the core fans. It’s expected to see core fans to complain about the revised designed, especially if they’re drastically different, but then again these are the same people who would hate to see this game becoming a hit with the general public. No fear, no fighting game will be the new Street Fighter II with current gaming paradigm. As such, this time we’re going to take a look at three Guilty Gear Xrd character designs and see if the visual direction has evolved or just changed. However, Guilty Gear has been out there for a long time, and it’s style has never evolved or changed, so a lot of core fans will hate most if not all redesigns simply because it looks different. Well, let’s get to the show.

Sol got tired of the long loincloth

Well, of course we need to start with Sol, the main character of the series. Guilty Gear maintained it’s 90’s aesthetics for a long time, and the new Sol design mainly updates the old look for a new decade. You can make a point about muted colours right off the bat, as Sol looks a bit brownish everywhere. They should’ve left the reds alone. Overall, the design hasn’t changed, just the style it’s drawn in. The details have been arranged and changed, but at a glance you know what character its supposed to represent. Fireseal, Sol’s sword, has changed the most, from somewhat grunch-realistic square sword to more a giant lighter with razor edges. Granted, Sol’s sword always had that lighter element in there, but with the redesign they decided to overblow those elements. Then again, redesigning swords isn’t anything new in Guilty Gear, just check how it looked in Guilty Gear 2. Sol actually lost a belt from his waist, which was replaced with a comically large one. That actually describes Sol’s redesign in a way; sleek and slightly comical. Not a bad one, but nothing good stands out from it, which on the other hand gives stage for all the bad ones.

Now some of you may start thinking why I’m saying that Sol’s design is the same while I’m arguing that TSF designs are different. The difference is that this is a redesign of one character using the same elements. TSFs have been designed to be a step above the previous unit. 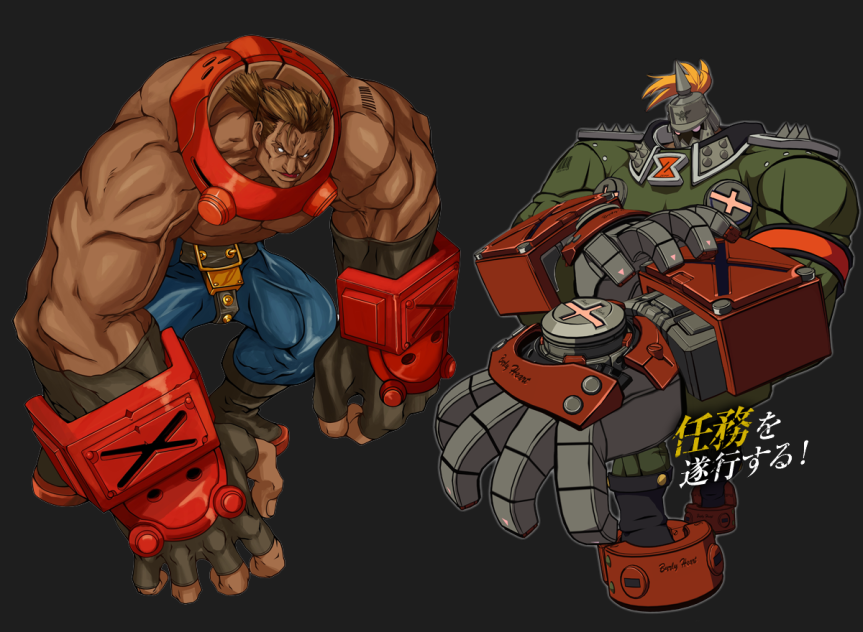 Potemkin’s design is the one that got changed the most here, basically getting a complete character design revamp. Gone is the bare dark skin, replaced with German inspired attire in military green. The gauntlets went through slight redesign, while the legs… the shoes are pretty horrible to be honest. Whoever designed those needs a slap in the face. To be honest, If you wouldn’t know it beforehand, you wouldn’t recognize this as Potemkin. This also shows a somewhat hilarious contrast between the two worlds of colours and between the two visual directions; the old one has muted colour in the hair and bright colours in the body, the new one has them the other way around. Staying with muted colours is a safer bet for sure, but looking at the two side by side like this really makes me miss the bright red even more. I’ve heard the location testers say that while he might not look like Potemkin, he does play like him.

Potemkin is a drastic change. It doesn’t really tell much about the character outside the military aspect. Then again, the old one just tells that he is big and strong. On one hand, old Potemkin did look a bit dull with interesting points here and there. On another hand, the new Potemkin is a generic German brute with horrible shoes.

Funny thing with Millia Rage; I really love her new design. Her old design is good by its own rights, but overall it’s rather uninteresting. The new one plays some Russian tones in there with the hat, but the hair is a bit too overplayed. Sure, Millia has had a flower theme before, but now the amount of her hair is in excess. Then again, that’s nothing new. They’re both good designs from different starting points, and they contrast each other well enough. It looks like the designers aimed to make Millia more into a high class maiden than the pure maiden she was portrayed as before, and that’s fine with me. Seeing how she has acted before does give leeway to her character to grow to that direction, if we even will have any sort of character growth in these games. We can always say that this is Millia’s take on taking a stand to be apart of the Assassins’ Guilt she isn’t part of anymore.

Surprisingly, Millia’s redesign seems to be most dividing at the moment, with some hating the hat, belt and button on her collar while other people just like it. By Guilty Gear standards her redesign is very toned down in bullshit accessory department; she even lost some belts, which is a bit surprising as Millia’s original design was rather bare bones to begin with. I don’t give two shits about shoes in general, but dang those shoes Millia has look hot. Unlike with the previous, Millia didn’t really lose her colours, but her hair did go through some muting. If I were to change one thing from new Millia, it would be the plaque on her forehead. I’d change it to some ornate gem or similar, or just remove it altogether. Then again, we haven’t seen license plates used as accessories in Guilty Gear yet.

I’m eagerly waiting for Jam’s redesign. I make it no secret that I main Jam simply because I’ve always played rushdown characters in fighting games, and Jam is just perfect with her Chinese arrogance. I’d also like to see Dizzy, and I really hope she’d get similar redesign as Millia did. Actually, I hoped every character getting a complete overhaul.