I’m not sure what to take from Nintendo’s E3. It was basically Pokémon and The Legend of  Zelda, and that’s about it. Everything else was useless filler with no worth to them. At least they stood away from bullshit gender politics. The more the Big Three remove themselves from politics in their products, the better.

I’ve talked Zelda a lot in the past. Not as much as about Mega Man, but still considerably. Much like previous Zelda E3 events, we had been teased with an awesome trailer, then few years of pause, and then something completely new. Remember this one?

Remember this one too?

From that Spaceworld demo, we got Wind Waker.

Twilight Princess‘ trailer stand apart from the lot in a way that it had an initial trailer that lot more oppressive, darker tone than what the game ended up being.

Funny thing is that Skyward Sword‘s teaser trailer was mediocre even at its finest, just like the game itself.

What Skyward Sword and Wind Waker lacked is the same thing this The Legend of Zelda: Breath of the Wild lacks; fantasy.

While Twilight Princess‘ trailer showed relatively impressive take on Zelda’s fantasy world, all these other titles seem to lack all of it. Breath of the Wild the most. We aren’t seeing what makes a fantasy game tick here, we’re seeing a goddamn nature preserve. Nature, if you’ve traversed in it, is incredible and beats anything seen in BotW. But hardcore gamers don’t go outside, right? They’ll enjoy these vast landscapes and distances from their home with Link.

The original teaser from 2014 for BoTW looks incredible. The game looks like it had an attitude, that it had an edge to it. It looked like it would return to the Action RPG mould rather than puzzle adventure Aonuma made Zelda into. But now, it seems Zelda’s becoming a nature trek simulator. Breath of the Wild may sound impressive in Japanese, but it’s a terrible title in English. It reminds of a Mentos or mouthwash commercial.

I watched most of Nintendo’s stream last night when they were playing the game. The first thing I noticed how much it reminded me of David Attenborough’s nature shows, and realised it was because they had British accented voice actress. Voice acting can be done with fantasy, but then the game needs to be done right. Adventure games are good examples of this. For Zelda, it breaks the fantasy and reminds you that these people are speaking in English, not the fantastical language of Hylians. Subtitles used to be about fantasy in their own way.

But the thing Breath of the Wild does worst is that it looks boring. It tries to bolt on concepts from other games like Minecraft and Skyrim to do its own thing, but forgets its roots. At a first glance, it might look like the original The Legend of Zelda, but looks are deceiving. In original LoZ, you had to do something in every screen of the game, be it fight an enemy or avoid it. You had to risk and search, you had to battle your way through. You had the exact same kind of adventure you had as a kid in the forest. No kid dreams of just walking in the nature and chopping trees and grass. Children and those who are into fantasy dream of walking in a forest with a sword and shield in their hands, fighting hordes of enemies. After all, the more orcs you kill, the more loot you can find from their bodies.

The boredom of BotW comes from the fact that it lacks imagination, and imagination is what makes fantasy work. The large overworld is the exact right step they needed to take after Skyward Sword, but they also need to fill that world with imagination. Everything we saw from Nintendo during their stream screamed the lack of it. Add something to the this world, make use that magicpunk technology to fill it in, create vast ruins rather than one bit of sanctuary in the middle of fucking nowhere. Don’t drop the player into an empty world with scripted event here and there with the occasional fight. Create large cities with tunnels or buildings, take us to the Moon, give vast caverns to and deadly forests as part of the overworld we can explore and venture through.

Give us anything but a dull world filled with nothing, like in Twilight Princess and Ocarina of Time.

It doesn’t help that the fighting in BotW has not evolved since OoT. It’s as basic as ever. It has no bells or whistles to it, it’s completely by the numbers, uninteresting piece. They should’ve asked Platinum Games to give them a hint or two, at least. In LoZ, each enemy felt like a threat and you got damaged accordingly. The Moblins were bulky looking, but now they’re just lanky clowns. Nintendo and Aonuma needs to look back at Katsuya Terada’s illustrations. 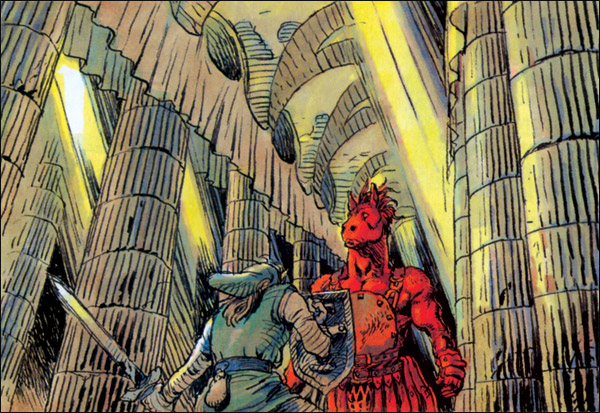 All these images here depict what Zelda is not currently; battles, mysteries, grand exploration, confrontations and NPCs in help. These do no depict scripted video sequences and puzzles. They are, with one word, badass. They depict everything Aonuma’s puzzle adventure Zelda games are not. The original teaser for BotW from 2014 more in the lines with these pictures, but I guess that’s something they’re not interested to make. Funny thing, the more closer to western fantasy Zelda is, the better it usually gets.

How the game will ultimately form up is an open question at this point, but they have an open world. That is a start, but only a start. Now that world needs to be filled and the player needs to be allowed to have his own adventure, not the one Aonuma scripted for him.

It looks promising, but potential is nothing to be proud about. Only time will tell if they manage to make good use of what they have made, or if it will fall into the Aonuma mould again.