The upcoming Deus Ex: Mankind Divided has been criticised for using imagery from the recent social movements in the US. Let’s see what’s all the fuss about. 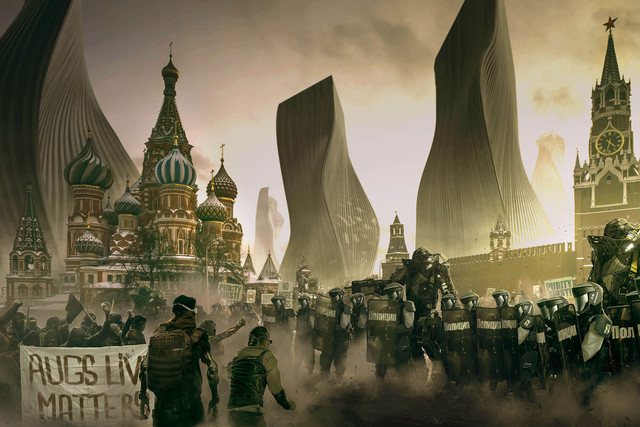 People got their pants twisted because of this?

So, that banner is the cause in this. Not the fact the pillars or houses, whatever they are, look absolutely terrible.  Even if the banner would be a reference of Black Lives Matter, there is no controversy here. The consumer can voice himself of course, if they see fit.

Of course, a fellow game developer would have a more level voice in this matter, right? If BioWare’s Manveer Heir is anyting to go by, that is not the case. On his Twitter, he is accusing Eidos Montreal on appropriating BLM, which I find hilarious at best. This is pot calling kettle black, especially seeing how much Bioware fucked things up themselves, not just regarding their PR. Their extensive use of homosexual characters for the sake of catering is, at best, extremely distasteful. The use of comparative cultural concepts and themes is nothing short of what Heir throws at Eidos Montreal. It is hypocrisy at its finest.

While people can criticise Eidos Montreal as much as they want to, it really begs the question why do they even bother? If they are offended by the fact that a similar slogan to what Black Lives Matter is, that’s on them. Rather than calling them out on a perceived wrongdoing, I would imagine they would be excited. Finally, a piece of multimedia entertainment that seemingly uses a proxy representation to discuss difficult matters. It’s not a long shot to assume the mechanical apartheid will have some resemblance to racial apartheid, and that’s great. Why wouldn’t you want them to discuss the matter?

Because it’s a faux-controversy. The game has been under development for five years now, longer than what the whole Black Lives Matter movement has been out there. They don’t have the trademark for X Lives matters slogan either. Now that modern westerns society has managed to clear most of the largest social issues, groups with generations that have nothing to fight for have begun to fight for things that weren’t an issue. The wish for safe spaces is one, which essentially calls for apartheid-like segregation for different people from different fields of live. Martin Luther King Jr. would roll in his grave if he would see how people fight for separated spaces and specialised treatments.

Thou I doubt King would like in Canada nowadays…

As said before, the whole thing with Augs Lives Matter banner is a non-issue. No lines has been crossed as of yet, unlike how Digital Trends wants to suggest. All this is completely OK.

The best thing about this whole ordeal is that Deus Ex: Mankind Divided is getting free publicity. People who have no invest in the game are slowly becoming aware that the game may actually hold something interesting, and seeing how these social movements’ public view is not at their finest at this moment. While I am not impressed at the level of media literacy the current Internet culture has, it would seem people who are not part of the movement have scoffed this off as yet another squabble on the Internet with absolutely no worth of weight.

This new Deus Ex seems to be coming out later this month, and without a doubt we’ll see some more shit flung at it. The trailers we’ve seen thus far, like the linked Mechanical Apartheid, seem to be rather hamfisted in acting and direction, but the idea is there. Deus Ex: Makind Divided  will discuss issues regarding humanity and our relationship with technology. Whether or not it can do it well is a question we’ll see answered later down the line, and as usual, the creators don’t matter. Only that the game will have excellent content and gameplay in a world where augmented humanity has been secluded to their own safespac- I mean ghetto, away from non-augmented humans. The best way to make that discussion have proper weight is to use real world points of comparisons, if not allusions. Mechanical apartheid may not be subtle, but at least it doesn’t leave anything open to question.

While I don’t see world where augmented humans becoming a thing like in the game segregating them behind the fences, that is slightly beside the question. Science fiction often starts with a question, here the question if What would happen if humanity would segregate its own once more? If you’re on the fence that using comparative imagery is tasteless or outright insulting, you should criticise them sure, but that is also exactly why you should not prevent anything from happening. If Eidos Montreal is unable to tackle the issues they want successfully, it’ll become a detriment and show that such things shouldn’t be done in the future.

If nothing else, Eidos Montreal is making these issues more known and giving them different kind of weight, perhaps even validating it in a way. Policing how others do or what they say is a waste of time, as more often than not it will be based on an opinion rather on a fact.  Of course, this blog doesn’t care whether or not there’s appropriation from a movement. All this blog cares whether or not it’s well done and applied properly, made something different and serve its purpose in a way that does not plagiarise. That we don’t know until the game itself is out. On the surface, it would be so easy to make profit on these different movements with simply catering to their sensibilities and demands. Looking a bit deeper we see that there is no bottom to these demands and sensibilities are so wide that it they can never be satisfied. Of course, one approach is to disregard anything outside your intended consumer group, and only pay attention to the paying customers. Or do the Nintendo and disregard everything your feedback and sales tell you.

Rather than concentrating on things that rub you the wrong way, we all should concentrate on the issues that we enjoy… and on more pressing matters than complaining about a video game tackling human-technology issue with currently relevant imagery.

And writing about that.