This monthly three will be a bit different. I’ll be treading some grounds that I’ve been through in previous entries, but this will be more or less a more cohesive series. This series of three will be about how Fight!! Iczer-1 OVA came to be, starting with Hariken Ryu’s Gekisatsu! Uchuuken, then continuing with Rei Aran’s original comic of Fight! Iczer-1, and ending in image comparisons between the DVD and BD release. The problem doing this entry is that a lot of information is just unavailable on certain issues, and thus some conjecture is needed.

So, where do we start when it comes to the OVA of Iczer-1? We start a comic illustrator who liked live action shows a lot. Hidemi Miyata, better known as Hariken Ryu, made his debut in #1 issue of Comic Lemon People February 1982, with his Mad City 16 Beat.

Mad City 16 Beat was just a one-shot comic that had potential. It contains elements his later and perhaps most famous original work would employ under heavy referential humour and emphasize on flowing action scenes.

The very next issue, Hariken’s possibly most famous work would appear, named Gekisatsu! Uchuuken.  It could be awkwardly translated as Sure kill! Space fist, officially the series’ English title is just Space Punch! The series follows the adventure of one Lien Yun, a young martial artist girl in a world gone batshit insane.

Yun wasn’t alone in his adventure through space kicking ass and taking names. Secretary Kishida Hayashi is her pain in the ass and an ally who also has Hakaider as his alter ego. Rom, a kid Yun befriends on her adventures, and who gets the short end of stick at times. Yun’s forever rival (and probably her “best friend” since childhood) Ran Reiga would make constant appearances and challenge her to duels. Then you have a random assortment of other characters that appear here and there, like Hidel Jamia Buze, Ouba Kenji and the android/cyborg Mari with her ilk. 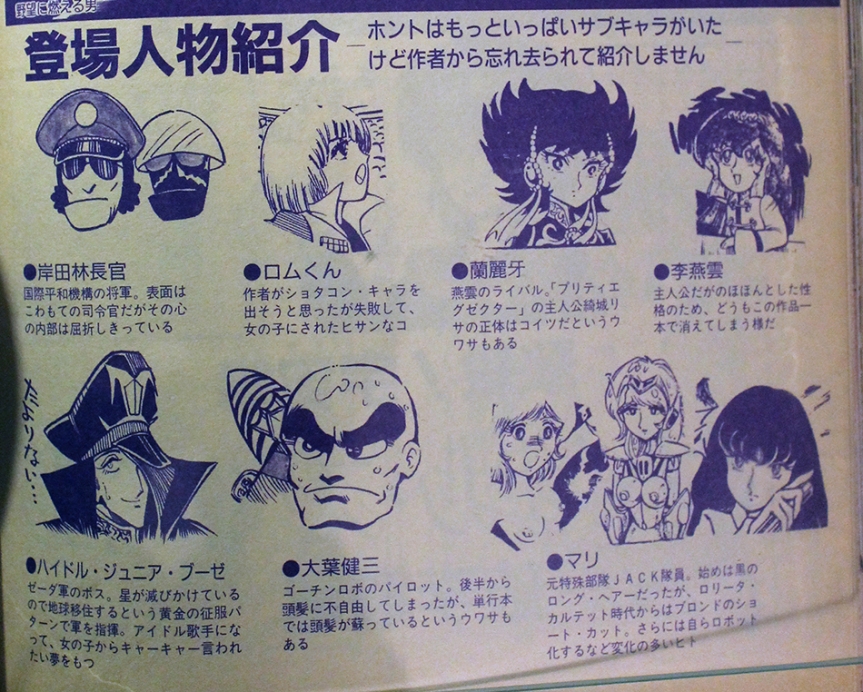 Characters from left to right listed above, Kishida and Reiga being the most prominent overall characters outside Yun herself as the top rightmost

Yun’s secret in kicking ass is her martial art taught by her father, who was also a damn good military officer. Her choice of style is the Rising Galactic Dragon, a pose she pulls off most of the time when beginning her fight.

The series was an excellent mix of pop sci-fi, martial arts and comedy with erotica thrown in there. Some chapters were light-hearted fun with silly things going on, while others took a more serious tone with gratuitous violence and gore. Yun herself was never just a another martial arts girl. She would keep her base childish persona intact, but would become more serious and aware of her own position as the series continues towards its end. While there is no true overarching plot as such, there are numerous arcs that tie the work together. It’s a solid cult classic to the point of people cosplaying as Yun at the time.

When discussing Space Punch! we need to remember that we talking about a comic that ran for several years in sexploitation magazine which essentially moulded the scene of Japanese popular culture in few ways. it affected, for example, modern moe culture and even SF works. The lolicon movement of the late 1970’s and early 1980’s affected modern sensibilities in both good and bad, affecting visual cues and how otaku would be seen by the general audience. In these three decades, the whole genre has changed quite a lot. Comic Lemon People‘s influence would require its own entry, so let’s drop it for now.

Space Punch! became a cult hit and became cover material very quickly, and the biggest thing to happen to the series

As you can see, this particular cover doesn’t only showcase a very clean Yun with a slight redesign, but also an announcement for a television animation. Some names that people may recognize nowadays were involved, like Toshihiro Hirano, name tied to Iczer-1 OVA, and Ichiro Itano, who has his name tied to Itano Circus thanks to Macross. An interesting point to note is that both Space Punch! and Fight! Iczer-1 share the same change in their titles; both gained an extra exclamation mark.

Hariken himself was all in the project, doing concept work.

What became of the television animation is more or less forgotten. I’ve yet to come across any solid reports from the era why it never hit the small screens, but I would hazard a guess; their sponsoring partner pulled out from the project late in the game, leaving the staff with tools and materials. The boldest conjecture I’m making is that these materials and staff were then directed into creating what became Fight!! Iczer-1.

A vinyl record was released, containing audio drama based on the series’ script with the voice actors and music. Sadly, it’s painfully clear that the opening song was never finalised. The release shows that cells had been painted, things were set up for full on production.

There could be multiple reasons why a partner would pull out from a project like this. While the show would’ve been a cleaned up version of the comic with no sex, the idea of animating an all-ages version of a sexploitation comic would carry a strong stigma. Then you have the difficulty of translating comic’s humour to an animation, as it would’ve had to cut all the unlicensed characters off. There is a story arc where Yun quite literally fights all the most iconic pop-culture characters of the time, from Darth Vader (who had to replace his helmet with Fett’s because Yun kicked Vader’s own off last chapter) to pretty much all Japanese giant monsters and everything in-between.

Whatever the real reason is should be asked from Hariken Ryu or one of the staff members. However, it would seem that because of Space Punch! never came a series, the materials gathered for it were put into good use. A the time, the Original Video Animation scene was getting wind under its wings with 1983’s Dallos. However, it would be 1985’s Megazone 23 that would prove to be the first successful OVA, being released in March while Fight!! Iczer-1 was released in October the same year.

Space Punch! would finish its run in Comic Lemon People and would be collected in six books. Reprints won’t ever happen, thanks to much tighter copyright protections we have nowadays. The collected books go for stupidly high prices as well, often starting from 4000yen or higher. Hariken Ryu would continue drawing comics until the mid-1990’s. Some of his works were collected at the time into Gigantis’ Blade, which also includes a one-shot story about a kung-fu android, and feels a sort of send off to the character design he first debuted in Mad City 16-Beat.

One of his last completely original works in comics would be Pretty Executor, a comic that also had a movie version he himself directed in 1987. The movie doesn’t even have an entry in IMDB, telling how well-known it is.

Hariken became more or less a full-time actor around this time, working as Godzilla’s suit actor in Godzilla VS Biollante‘s promotional roadshow due to his experience as a stage show actor in the late 1970’s. He would debut on-screen as an actor in Toho’s 1991’s  direct to VHS release Mikadroid; Robokill Beneath Discoclub Layla as the titular Mikadroid. Hariken would then proceed to be King Ghidorah’s suit actor in Godzilla VS King Ghidorah in 1991, Battra in 1992 and continue to act as both Baby Godzillaa and Junior. He has continued to act and direct here and there.

He has also penned some books about tokusatsu and other works, and none of them have been translated. Hariken ryu may be largely a forgotten name despite now, but his works still have a small but strong cult following.

Perhaps someone should pick up Space Punch! and revive it for the new millennium.