What is a man to do if you want physical copies of games, but games are incredibly, stupidly high in price? Find cheaper alternatives or better deals. One consists of digital copies and reproductions, whereas the other takes time and impeccable timing when it comes to auctions and spotting those deals. Sometimes, reproductions can be a way to go, especially for titles that have no physical release or homebrew. Or when you can get one for a laughable price compared to what the real deal goes for.

During one of mid-night browsing sessions on eBay I noticed that a Chinese seller had Battle Mania in “perfect” condition for some 20€. Fully knowing that it would be a Chinese reproduction I decided to give it a go. While we could raise a discussion whether or not reproduction carts of twenty years old games that are not available anywhere any more counts as piracy, I’ll just slide the question aside for now and mention I already got the US version of the game.

So, does the item do any justice to the real deal? The comparison point I’ll be using is any other Japanese release of Mega Drive games I’ve got, mainly the excellent Devil Crash MD and an interesting SF Golf RPG game Battle Golfer Yui.

The first thing we see here is that the case doesn’t really follow the Japanese style box because it has the rack hanger on the top. Second is that the plastic used on the box is cheap, as expected, but it could be much worse. It’s shiny, sturdy, but also very prone to warping under even the slightest heat source, like my old desk lamp. My copy has bulked out a bit, probably during injection phase. While it locks close just fine, it does look a bit strange on the shelf. The wrap is also extremely glossy and lacks the texturing a real Mega Drive case would have. The glossiness throws glares a bit too much and does feel cheaper. However it’s not exactly terrible, just cheap.

The cover slip is very thin, good quality paper. It’s a good substitute to the one used on actual Mega Drive games, but the print quality doesn’t stand up to the task. This is understandable, as in order to have these prints, the seller must’ve first scanned the original piece. The only place you can see scan generation deterioration is on the text. The text is slightly blurry and soft, mostly because necessarily sharpening was not applied, thou in cases like this I would’ve re-typed the text in order to ensure that it would come out in better quality. The first impressions on the case is overall good for a Chinese reproduction. The expectations were at the bottom of the barrel, after all.

The cartridge, however, is pretty terrible.

This sort of generic cheap plastic is common with cheap productions. I shouldn’t have been surprised to see it used, but here we are. The plastic itself has a slight hue of grey to it and the parts don’t fit exactly perfectly to each other. Again, this is due to the material being that much cheaper and living during and after injection moulding. The label on the back you see there had to be peeled off through heat treating and suffers from the same scan degradation as the slip. This is disappointing overall. The cartridge really should’ve been the place where the effort should’ve been put into. 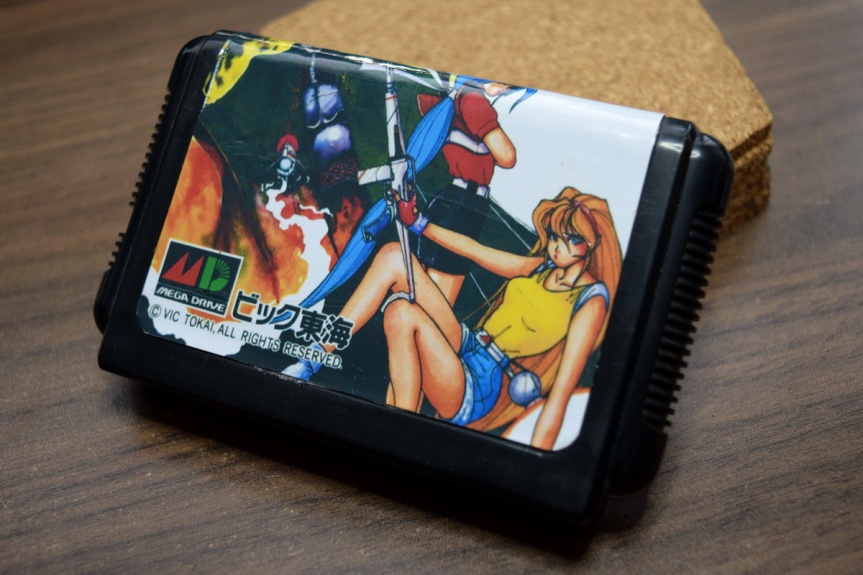 The scan degradation is most apparent on the cover label. While it looks decent on the first sight, the label is tacky and of low quality. The paper used here is thick and glossy photopaper, which doesn’t want to bend right and has really low quality scan on it. The real Mega Drive cartridges have very thin matte label on them with very high print quality on them (most of the time) and this comes off as a terribly lazy way to waste this kind of paper. It doesn’t help that the label’s too damn long.

So, the label was so long that it went far over the usual region where Mega Drive labels reside. Seeing Mega Drive games mostly used a standardised cartridge, this is a weird fault I can’t fathom. I had to cut out the extension out, and you can see both of the labels slowly peeling off. The thing with Mega Drive carts is that they have screw under that back label, and to open a cart you either have to peel off the label or cut holes.

The manual doesn’t really raise any confidence either, as you can see.

This is pretty damn terrible. Both print and scan qualities are low and the paper used is the same glossy photopaper as the label. It doesn’t sit well in the case and the ink hasn’t set on the surface. You can see scuff marks on the bottom, where the case’s tabs took ink out. The manual is overall terrible and not worth the paper its printed on, so I won’t be taking it out for any sort of photos. The contents are there, just in a very low quality. The source used was probably some random scans off the web that were resized for print, killing the quality further.

So, if you took the cartridge apart, what’s in the inside? Good question.

A reproduction on a chip and it runs about the same as the real thing. It looks very cost-effective build. It has no weight to it and while it looks cheap, it… it really is. However, this is what I discussed previously about reproductions. It’s much cheaper to put a ROM on a chip rather than replicate the original pieces. Saves time, money and space. Of course, in order for the contacts to have something to stand on, you need to have something to it. This Chinese reproduction opted for a very interesting but sturdy plastic to add area to the PCB. It doesn’t exactly fit into a proper Mega Drive cart, but with some creative knife use it fits in just fine. Interestingly, the chip is so low that it interfered with the real cartridge and a slot had to be cut for it. However, the game sits well in a real console, regardless in what cartridge the PCB sits in.

The reproduction plays Battle Mania just as you’d expect. Outside the casing the ROM sits in, during gameplay there’s nothing that would make it stand out from the real thing. While that’s great, the fact that the thing its wrapped in is bit of a letdown does make me question whether or not I wasted 20€ for a review. It does look decent when it’s sitting on the shelf, and after changing to a proper cartridge it doesn’t feel as cheap. In the end, that’s what you get; a cheap Chinese knock-off. At least the seller is clear about this. The price does seem on the point in the end, but only barely. With a tenner more the quality could be upped considerably, both in print and plastic, but more work should be on the computer to ensure the scans and their prints would stand up to the expectations. Just the fact everything has been printed on glossy paper tells this is somewhat amateurish repro, or that they don’t care. Probably the latter.

2 thoughts on “Review of the Month; Battle Mania Chinese reproduction”