The stock three-pronged Nintendo 64 controller is a peculiarity, to say the least. Whatever Nintendo’s approach was with it, be it designed solely to play Super Mario 64 or just try to separate itself from the rest of the controller crowd, it has ended up as rather infamous. To cut to the chase, it’s not very good as a general controller, and its shape doesn’t exactly fit the hand as intended.

Enter Retro Fighters’ Brawler 64 controller, which was Kickstarted a while back, to which I threw some money at just for this review. Intended to be competent, modern replacement for the stock N64 controller, the Brawl 64 opts for the now-standard pad design and placements, while also carrying the action button setup from the stock N64 controller. There is a follow-up campaign coming up with updated firmware and hardware for translucent shells

The initial expression of the controller is rather unconvincing due to its lightness. The stock N64 controller is not a weighty beast either, weighting 230g . However, the Brawler 64 is only 188g, making it feel cheaper. The plastic used feels nice with its matte finish, but as usual with surface finishes like this, it’ll rub off on the long run and becomes shiny and slippery. The Retro Fighters logo there is rather distracting, but all companies tend to put their branding on the forefront. It would have been better if Retro Fighters’ had followed Nintendo’s lead with this.

The stock N64 stick is pretty terrible. It’s not even a matter of it being the first one, it’s just not terribly comfortable or tactile. It’s like a stick on a spring, which grinds itself to death whenever it’s being used. The design is simply faulty, and even at the time there were better options out there. Brawler 64 uses a similar stick that the GameCube had, which is pretty much the best standard for Nintendo sticks out there.

The stick has a nice rubber top to it, but lacks any sort of directional touches. Four dots for each cardinal direction would have been nice, as such slight additions usually make a controller more tactile. The stock N64 controller had rings to it, but was hard plastic and was not pleasant to use. Comparing the two, the Brawler 64’s stick doesn’t slip around your thumb in standard conditions. The stock N64 stick on the other would, and would carve your finger’s or palm’s flesh under constant use.

The D-Pad, sad to say, is lacking in tactile feeling and the corners are rather harsh to use. The reason why standard N64 D-Pad at the time felt so good in hand was due to its larger radius in the corners. Brawler 64’s  flat nature is a far cry from the stock N64 D-Pad’s nice, almost comparatively chunky size. It does its job, but at times I’ve noticed missing diagonals in order not to rock my thumb on the corners.

As for the action buttons, they’re a mixed bag. The four yellow C-Buttons are slightly larger and apart from each other to allow more comfortable use, but at the same time the A and B buttons have been lowered. When pressed down, they’re less than a millimeter over the controller’s surface. This is not the case with the C-buttons. This makes the A and B buttons less solid in contact and feel like secondary inputs rather than the main ones.

The Turbo functions use hard plastic buttons, and they do their job just fine. Nothing special about them.

The L and R shoulder buttons emulate the stock controllers in shape, but not in function. They’re tad mushier than the crisp shoulders Nintendo used, but the the Z-button(s) have been modeled after triggers and feel rather terrible. For a Z-button, there’s too much travel and feel off compared to the short travel, one-click Z-button on the stock N64 controller. On this particular piece, the left Z-button is slightly stiffer compared to the right one, meaning the quality control has been slacking.

Speaking of lack of quality control, there is also a problem with the L-button and the stick. When the stick is pointed at up-left corner, the edge of the stick’s base interacts with the L-button, pushing it backwards. It gives off an awkward feeling and will shorten the lifespan of the parts to an extent. Once you notice it, it’s gnaws you every time you play a game.

You’d think the back case would prevent this, but the L and R buttons have some free room to roam, and if they didn’t the stick would hit a stop. 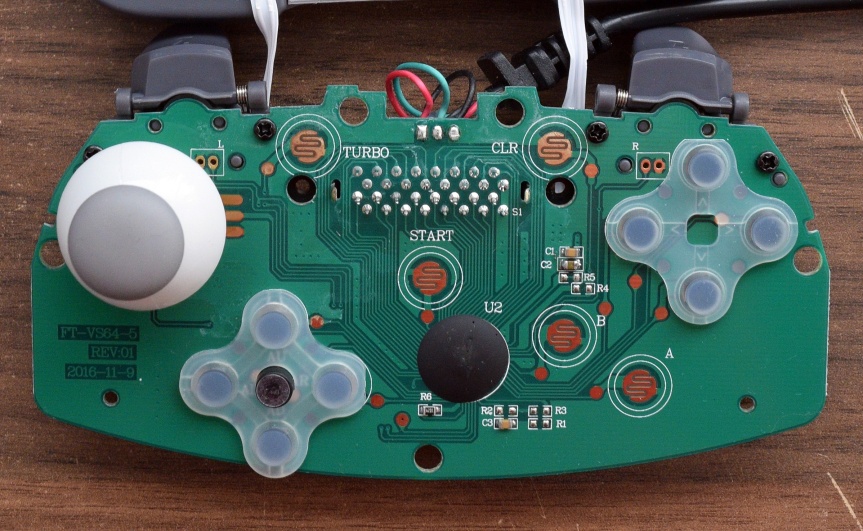 The PCB is clear with no 90-degree turns, but I am a bit disappointed to see that epoxy blob in there. Nothing exactly exciting is going on here, but I’m guessing this would make a decent project controller.

The back of the PCB has less to go with it, but the few rigid cables we have here will probably snap next time I open the controller, and the wires going into the lead seemed already breaking apart from the surface. Shouldn’t be a problem as long as I don’t open this particular unit in the future. What’s interesting in the front case are the slots in both of the handles. These shapes are very similar to Dual Shock’s vibration motor housing. Perhaps at some point in development Retro Fighters were intending Brawler 64 to have built-in rumble, as they’re not needed for structural integrity.

Speaking of the back, there’s the controller expansion slot. There’s nothing wrong in its shape or function, but the software running the controller does not support the Transfer Pack. Instead of resolving this problem, Retro Fighters decided to put these into production. To quote from their Kickstarter update from 6th of December 2017; We don’t want to stop production to troubleshoot the transfer paks which could increase a delay to 90+ days or longer. Rumble & Memory Paks are 100% compatible with the Retro Fighters controller. Uh huh, and here I was thinking people were backing a proper N64 controller, not an impotent one. Not that many games use the Transfer Pack, but not having it also means one of the main attractions of the N64 with Pokémon Stadium is very lacking.

It’s kinda hard to recommend this controller, but at the same time it’s hard not to. Despite its flaws with the L-button and stick, something which Retro Fighters are addressing themselves with replacement controllers or replacement pieces, depending what the backer has decided on.  It’s not on the same level of quality as the stock N64 controller, but that’s a given. It wouldn’t take much from design and quality control level to get there. This is, after all, just a retool of their previous controller.

It all really depends if the lack of Transfer Pack support is a deal breaker. If it is, then you’d better get get a Hori controller or wait for an updated revision. I would recommend looking for deals and trying to get around twenty bucks, if you can. The current iteration is just lacking.  Nevertheless, In core design Retro Fighters’ Brawler 64 controller is better than the stock N64 pad, except when it comes to the D-Pad.

5 thoughts on “Review of the Month: Retro Fighters’ Brawler 64 controller”