Sorry, no Aalt today, A9 to the rescue. You guessed it, time for another Digimon design post.

What a cute little bugger. Like all early Digimon, Gabumon had its sprite designed first. The actual drawing and finalised design only comes later. As usual, the first sprite comes from the Pendulum toys with its small displays. As we don’t have the official design yet, this is the most basic image that exists, and it looks like a weird bunny that’s standing up, ready for a fight. 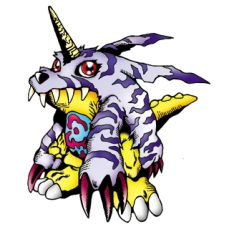 And there we go, the actual design. Naturally, the first thing that springs out here is the pelt, a new addition compared to the sprite. Other features have been exaggerated: a longer snout, large teeth, bigger horn, thicker legs and bigger ears. The sprite already featured stripes of some sort, but now they are transferred unto the fur and boy howdy have they multiplied. Giant claws extend from the fur, with two extra (empty) arms hanging in the back. Another new addition is the tail, which seems quite reptilian (which Gabumon is, underneath this fur). Finally, there is the egg shaped mark on its belly. Personally, I see some small resemblances to Agumon here as well, the yellow colour of the main body, the small feet and the somewhat protruding snout with higher placed eyes. 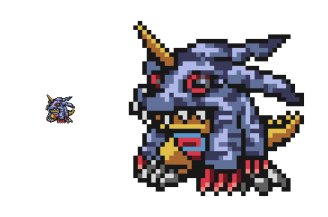 Games time: Digimon Ver. S. Although our friend got squashed a bit, most details remain, although the fur colour got quite a bit darker. Most of the stripes on the fur stay in approximately the same place though, which surprised me of a sprite of this size. Furthermore, the toe claws are a bit sharper instead of the dull ones from above. The only other major change is the belly, only because there was no enough room to properly put that whole design in such a limited space. 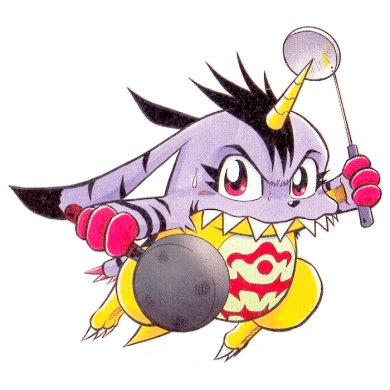 If there is a chance to talk about the V-Tamer manga, I’ll take it. It’s one of my favourite pieces of Digimon media, but that’s something for another time. This is not quite the Gabumon you know, yet he appeared a few months later than the sprite above.

Disregarding the ladle and pan as props, it’s a more simple design with a cute charm. While Gabumon still wears his fur, it has a more smoother look. This manga isn’t really clear on his extra arms though, as they can sometimes be seen (as in the picture above, below his left arm) but on other drawings they are completely missing. The overall shape of a lot more simplified, with the snout being much more flat and wide (yet retaining his teeth). The very small tuft of hair that was present in the original design has grown quite a bit, even surrounding his horn. The belly markings are still there, but have seen a bit of a redesign giving the top marking extra curves while giving the lower ones pointy edges. To top it off, its feet have also shrunk considerably so the for actually drags over the ground a little.

Very noticeable is the fact that its claws turn into digits, allowing it to grab things. Previous incarnations actually have hands hidden inside the fur, making the claws part of the ‘wearable’ fur.

As can be seen here, in a screenshot from Digimon World. A very faithful model, with only the smallest details left out or simplified such as the bumps on its tail, no small tuft of hair around the horn and the lack of extra arms, the rest is fully visible. The aforementioned hands within the fur, the belly design, the horn and the long ears. Its teeth are even protruding giving it a bit of a savage look.

Time for Adventure. This design is a whole lot more rounder and cuddlier, with the savage details being toned down for a cuter look. Let’s start from the top, the horn. It is almost completely identical, save for a few missing lines on the top and bottom and the colour. The original horn had a lighter shade of yellow than the main body, but those are minor things. The fur has gotten a bit lighter and the purple stripes have turned dark blue. Most of the markings are in their original place, but some are missing like on his ears and his extra arms. Now for the most major change, the face. Just like in the manga it is shorter and wider, giving it a cuter look. This is also made possible by making the teeth smaller and making them stick out less. Because of these changes, this reptile head looks more like a weird dog.

The eyes have changed ever so slightly, with a little less eyewhite being visible. This also contributes to the cute factor, has it is less of a predatory look. The mouth is changed in a very subtle way, by giving Gabumon a chin of sorts clearly defining the head by adding an extra line above the markings on its belly. This gives off the idea of it having a very fat neck.

Yet again we have to look at its belly markings, because they have changed again. Just like the rest of the design, they got smoother and lighter, but more importantly it got symmetrical. You can argue that the original design has no clear perspective for the belly markings, but it’s also possible it’s just a very weird shape in general. The arms lack a few veins as is common with the early designs, but they’re also slightly longer and more importantly closer to the actual claw part of the fur. Ending at its feet, we have smaller toes (claws) that are more removed from each other while also being sharper. 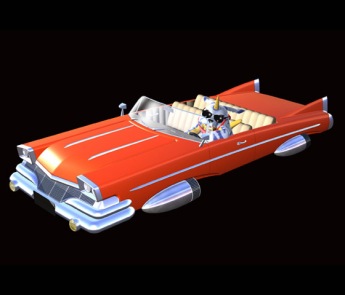 Honestly, we cannot tell all that much from this image. I just really wanted to include it, since he looks baller as fuck.

X-Antibody time. As always, these designs are complete overhauls being based more on nature and ‘realism’ as far as that’s possible. In the case of Gabumon, that means that it’s no longer a reptile, but a beast, drawing more inspiration of a giant ferret. Its horn size (heh) increased and the fur changed to a darker shade of blue / purple. It covers almost the same area, except for the snout and one of its arms with a different pattern. This also reveals the way smaller teeth and a snout that’s not on the fur. Claws have formed at the end of his hands, and the claw on the fur has drastically increased in size. According to the lore, it picks up pieces of fur left behind by Garurumon and shapes it into his fur pelt. He keeps one arm bare to set it on fire to punch others with (we can only hope it’s magical fire). It’s unclear if this form has two extra sets of arms as well, as images are scarce of Gabumon-X. The tail has changed from a reptilian tail to a furry one and the other big change his the belly markings. The belly itself is a dark purple instead of teal, and the markings itself have a drastic different form with very sharp corners. As far as I know, the markings have no meaning but it’s still interesting how they even changed that aspect.

We also got a slight redesign in Re:Digitise. This one is fully based on the original design and doesn’t have too many differences except for some minor ones. The horn is sharper at the end, and the markings are more subtle and thin. The fur is almost the same, except that it looks raggedy and worn. The darker stripes are also a little lighter while being in the same places as before. An extra detail is revealed at the mouth however: since the mouth is open, we can actually see the teeth of Gabumon itself and not the fur. The reptilian side comes more way strongly here and is a nice touch. The muscular legs are more defined, and end it sharper claws. All in all, this is personally one if my favourite designs, even is it starts to look a bit like Agumon with a cloth over its head. In all essence, this is not as much as a redesign, but more of an update.

Two more 3D models, from Digimon Masters Online and Digimon Allstar Battle Arena. Both are based on the anime version of Gabumon, but they both show one important change: there are straps beneath the fur to hold unto. It actually makes sense, how else would Gabumon use the claws without them flying off his hands? Nevertheless, it’s seen after. The only other major difference is from the first 3D model, where the belly marking has gotten significantly smaller. 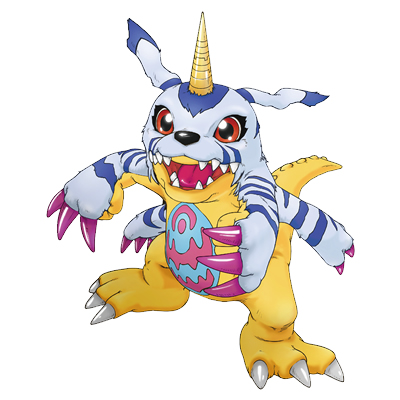 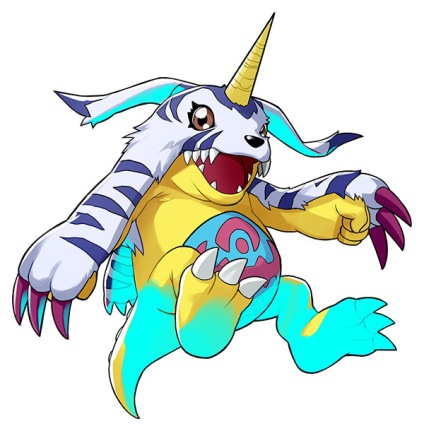 Gabumon from Cyber Sleuth and Cyber Sleuth Hacker Memory. These games share the same artstyle, hence them being grouped together. As you can see, no straps to hold unto, but there is another change: big hands. The size of the hands has increased, causing them to not be fully enveloped by the fur and ‘pop out’ a little. The fur got some extra detail as well, causing it to look a little bit more rugged. To top it all off, and this is a pretty strange choice, the eye colour starts to turn a little brown.

Even though they are basically from the same game, there is one other change between them, although I suspect it’s mostly artstyle related: the first one has a very clear defined tongue while the other goes with a more ‘the inside of the mouth is just red’ approach. Maybe a little mundane to focus on, but at least I mentioned it.

With that we come at the end of some of Gabumons designs, but we have our first bonus feature here: peltless Gabumon! 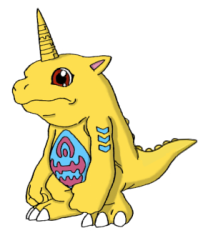 Only a few images of peltless Gabumon exist, and they vary in colour. This is the true reptilian form: no teeth shown, droopy ears, no beast-snout. You can see the scales on its tail moving along its spine, but the most interesting detail are the markings on its arm. It almost feels out of place, as it looks to me like a military rank tattooed on its arm. But hey, I won’t judge.