Two reviews, in the same month? That’s what I call Lack of proper topics but mainly because the Joycons themselves are rather interesting piece of hardware once you get around how they’re spun around.

The JoyCons are essentially Wiimote 2.0. When attached to the main unit/screen, it becomes the second most unwieldiest portable console after the Lynx. It’s general shapes follows Sony’s handhelds and the Wii U pad quote closely, but at this points its more a necessity of ergonomics than lack of ideas. After all, pretty much all controllers follow the same core design nowadays rather than having widely different takes. 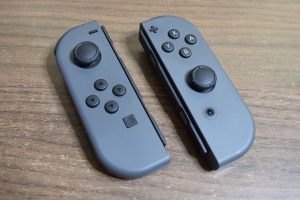 Of course, the main gimmick the JoyCons have is the ability to detached them and use them in tandem or individually. This is very neat, but at the same time these controllers are small by necessity. While slightly wider than the Hori Commander Mini I reviewed on the Famicom, everything else is in smaller scale. When used as single controller, you have access to the stick, four face buttons, two “shoulder” buttons L and LZ, and “top” buttons SL and SR. You can see these on the railing. Depending on the controller, you have Home or Capture button, and Plus and Minus (essentially glorified Start buttons.) The button that exist as shoulder buttons when JoyCons are attached to the main unit or grip rest awkwardly near your palm. The ergonomics are also lacking, but that comes with the size.

The sticks aren’t exactly the best, and it could use some some of the clickiness NeoGeo Pocket has. They lack any sort of tactile feel, despite the cutouts on the rubber. You simply don’t feel it. It has very short travel distance, which means control with tension becomes a must with certain games that require extensive stick control.

As the controllers have to work both as single entities and in tandem, the placement for the action buttons are sacrificed. They’re very much in the middle of the controller, which works when in tandem, but in single mode they’re just too far from the left edge, though larger hands could probably find this comfortable distance. This is also the reason why there’s no D-Pad on the Switch; everything has to do dual task, and these facebuttons, that use N64 controller’s C-Stick directions, work as D-Pad when used in tandem. It’s awkward and lacks the same smooth use as with normal D-Pad, and sadly its serviceable by a hair. Their dimensions and placement has been worked to its optimum. The buttons themselves are of better Nintendo standard, where the travel is pretty spot on, perfectly raised above the level and have nice tactile feedback.

It must be said that accessing the SL and SR buttons are surprisingly accessible, as index fingers seem to naturally hit their place. On themselves, they’re a bit too flat to use properly, but that’s why Nintendo gave us the wrist attachment people seem to put the wrong way constantly.

Plus and Minus are tucked away in the corner nicely so you don’t hit them, but whatever mode of control you use, they’re awkward to use. Think of Xbox’s Duke’s black and white buttons and you get somewhat similar idea. 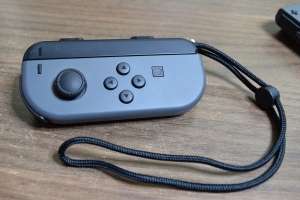 The wrist attachment slide the opposite way you slide the controller into the main unit, corner symbol meeting corner symbol. This adds some heft to a JoyCon and makes it somewhat nicer to hold in your hands, but its main use really is to make the SR and SL buttons more accessible with the larger pass-through buttons.

While you can use JoyCons in tandem separately like with the WiiMote and its nunchuck, Nintendo shipped the console with the grip attachment. It’s not exactly the best however. It’s like they wanted everything to stay straight and have the JoyCons sit like they sit on the main unit. This means whenever you use this, accessing the left face buttons for D-Pad use and the right stick requires either over-extending your thumb downwards or move the whole whole on the handles. Supposedly, the prototype was in an angle to give it more ergonomic shape, but for whatever reason this was dropped. There are many custom attachments on eBay that fix this and make this the most viable option to use the JoyCons in tandem. It would seem that the JoyCons will see rather large amount of optional accessories and attachments down the line. Here’s hoping Hori will do some good ones in the future, like the upcoming D-Padded JoyCon.

So, bottom line? The JoyCons are not the best controllers out there. The whole thing of them working as a single unit or in tandem forces just enough compromises to make all of them feel somewhat awkward. As usual, once you get used to them, muscle memory handles moving your hand up and down as needed. If there had been some concessions for functionality over visual design, these would have been winners as first hybrid console controllers. As they are now, JoyCons do their job, but the alternatives are probably better.

I must admit that the JoyCons have one thing over all other controllers; Switch has the most satisfying feel of clicks and clacks whenever you are attaching them to anything.