There has been some interesting development in regards of certain video game packaging as of late, if you’re someone who has a thing for package designs. Mainly that there has been a large movement to unify them under a generic design, especially if they’re from Limited Run Games or by a Japanese company. Two could be a coincidence or style chosen by a certain corporation. Three’s a company, but five starts to say there’s a standard going on. Game Paradise Cruisin’ Mix Special, Dariusburst Chronicles Saviours both JP and Limited Run Games release, Senko no Ronde 2, and now Darius Cozmic Collection all use the same kind semi-slim box design that can be used to house multiple types of objects by changing the inlays. With this basic design, the thickness of the box is easy to adjust as well to offer more room. People who like uniform shelves will like this direction quite a lot, as the boxes now are of same height and width, with some changes in thickness. Still, an evolution from the widely and stupidly different kind of collector’s editions boxes that just don’t really fit anywhere. I can’t help but feel that this homogenisation of boxes takes something special from these special editions.

If you read the review on Dariusburst Chronicles Saviours box few years back, you should mostly know already what to expect. 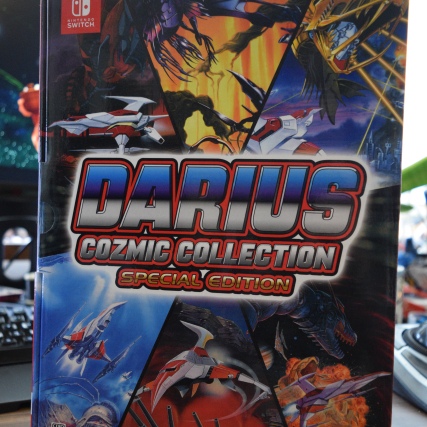 As you’d expect from the front, Darius Cozmic Collection Special Edition looks rather spiffy. Sure, the logo’s taking a lot of room from the cover, but all the six main images try to come through in a good balance. The only bit that ruins the Switch logo on the top left, with it being the largest logo on the box. Taito’s and CERO logos at the bottom are perfectly sized in order not to mess with the layout, but the Switch logo just hits your face. It’s a box front, and the back’s as you’d expect it to be. The layout’s nice, uses some of the game graphics and rather than trying to sell the game with overtly just vomiting text, the graphics are there to sell the package. They do that nicely. The usual required legalese at the bottom doesn’t interfere with the rest, as it functions like a some sort  pedestal for the rest of the back.

When you first open the package, you’re greeted with the miniature marquee plaques. This is an absolutely beautiful set, even if its just bunch of transparent plastic with layered printing on the back. The printing is sharp and of high quality. Nothing less would really suffice, if we’re honest here. Most often Japanese companies don’t sacrifice quality when it comes to limited editions, and know that the perceived value gained from putting the effort into stuff like this is enormous benefit. It works, and you could attach these to anything you’d wish. There’s a not much weight to them either, so just throwing some bluetac behind them would keep ’em in place, though they’d truly shine if you had something to light them from behind. 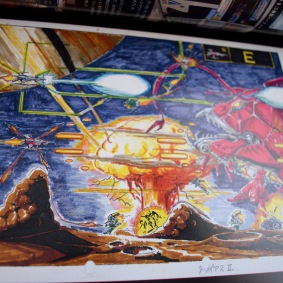 After lifting the plaques and two spacer sheets around out, the main book of the package reveals itself. Darius Odysseys have always been great source material books with some slight change in emphasize, with the previous Dariusburst collections emphasizing on listing enemies. This time we have emphasize on production, both the actual cabinets, prototype artwork to layout the screen scenes, packaging scans, preliminary sketches and all the that good stuff yours truly loves to see. Hell, even the scans for the game packaging are of great quality and highly appreciated in the wholesome box form they’re presented. It’s a nice and thick book with great production value to it. The only thing that could’ve made it better would have been hard covers. This is the kind of material we rarely see, and it’s a marvel to see production material like this.

Lifting the space the book is recessed in reveals the last bit at the bottom of the; the bog standard Switch game case and the soundtrack slot. Funnily enough, this game with two soundtracks, and only one fit inside the box. The other was just laying inside the box, but seeing that was more or less a seller’s special, it should impact on the value of the core box. It would’ve been better to use a different cover for the Limited Edition and standard edition cases, but I guess this sort of unifying look to the whole package has its benefits too.

A package like this really lives through prestige. Most of it is sturdy, can take a hit or two just fine, just like the rest of the boxes like it. Nothing’s flimsy here, not even with the spacers. It’s a bit weird that one of the two CDs, even if it was just a seller exclusive item, had not slot designed inside the box. Now it’s just floating around somewhere on my couch among all the other stuff. Still, a package design like this might be somewhat dull, but it’s extremely well thought out for multiple intended uses. If this has become the standard for limited editions in Japan, guess this is the golden standard we should compare the rest of the gaming packaging we come across in the future.