Back in 2016 a Royal College of Art graduate Micaella Pedros showcased a method to use plastic (polyethylene terephthalate or PET) bottles as a joining material to create furniture. This is done by collecting empty bottles and cutting their top and bottom off to create a ring, which then is heat-treated with a heat gun or similar source to make them shrink around the two objects. This method of wrapping two objects together creates sustainable furniture, she claims. This is nothing short of bullshit. The idea of collecting trash and repurposing it for sustainable use is a dream come true to many designers and artists out there, but it’s not this easy. We can clearly see that the furniture Pedros has created look like trash and do not hold up together alone. In numerous examples we see her using screws to keep parts in place, which in itself already is creating a stronger joint than the bottle rings. This design also necessitates using grooves and cut-outs between the two objects to create a proper holding wrap, as there is no adherence between the wrapping agent or between the two objects. It’s just melting plastic over the material, which means the material itself has to have something that keeps itself from moving around. Without the grooves, you could just pop bits off. In actuality, how RCA’s website describes the method is bullshit, as they describe the method as …used a heat-shrinking process to transform the plastic into malleable rings, which could then be placed around pieces of wood. You can’t heat-treat them first and then place them around the piece, you have to do it the other way around; place them around the objects and then heat gun them. There are chances someone will burn their fingers with this.

The material itself is a bad choice as well. PET bottles don’t last long. UV radiation degrades the material and considering Pedros was collecting these from outdoors trash, the material she was using had already started its degradation. When you add the heat-treatment to shrink them, it loses more of its strength and brittler. Might as well mention that every time Pedros heated one of these plastic bottles up she was releasing toxins and carcinogens to the air. Not by much, yet should be noted as all this goes against her theme here about recycling and sustainability, as this has neither. Pedros saying this method satisfying and magical, how anyone can do it, embraces the democratic value of DIY culture, is nothing short of short-sighted bullshit. Anyone can learn how to screw things together, anyone can learn how to use glue. There isn’t anything magical about this in DIY sense, and everything is worse on multiple levels. This isn’t about creating a sustainable piece of product that would last in use, or about even recycling in itself. This is what I’ve called statement design, a form of art that doesn’t try to improve life or otherwise push any envelopes forwards. It’s there for the artist’s self-satisfaction and wankery disguised as high-art and innovate design. It’s faux-activism that is taking time and materials away from actual recycling. You don’t start a sustainable and recyclable design from the back end. It has be to be begun at the drawing board before anything else, where you can choose materials and production methods that don’t promote further creation of unsustainable plastics and such. A designer who wants to create something lasting doesn’t go to the trash pile and see what they can do with the trash itself, that doesn’t stop the creation of more trash. The whole green design movement is misunderstanding the difference between sustainable design and recycling, and while we can use recycled materials in sustainable design, this isn’t it. All this kind of approach is creating statement pieces that don’t last long, are outright dangerous to use and will never see large scale production or adoption as the end-result first showcase look like what they truly are; trash. 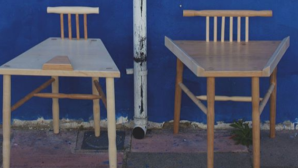 While Micaella Pedro’s plastic wrapping method is largely harmless, the same can’t be said about Laila Laurel’s ‘Manspreading’ chair. This chair, designed to stop from spreading their legs apart, was as Reminiscent of medieval torture devices translated through mid-century style and that’s what it is. It’s not every day you hear a torture device winning an award. Disregarding how you feel about manspreading, whether or not it is an issue, this is the exact opposite of what design should be. This is statement art at its finest/worst, where the whole idea is to make a social shout to the creator’s peers, not create a product of worth. In terms of design, there is an incredible lack of anything to grasp on, with the seats being simple slabs of wood and the backrest is effectively unusable. Note that the chair meant for men, the one on the right, doesn’t have the backrests pylons straight, with the third one from the left being visibly grooved. The craftsmanship looks something like an eighth-grader would do during crafts lessons. At least the joints look like something that would last more than a year, meaning this chair already has sustainability and longevity over Pedros’ PET bottle project.

Because these chairs are meant to make a statement, they’re not there be used. They fight against the human physiology itself. The little notch added to the women’s chair makes little sense. It’s there to prevent the sitter from closing her legs, but also to notch into a seater’s balls if it’s a man. The way the men’s chair grooves inwards could cause irritation and damage. The way the pelvis is structured between the sexes is different and how the legs flange out is easily seen what is the more comfortable way to sit. Sure you have the balls between there as well, as you don’t really want to crush them. Surely the 45-degree angles at the sides are meant to direct the man into a proper sitting position for the chair, yet it’d be easy to see people just sitting back property and lifting their legs over the sides, spreading even wider. The sharpness of those edges really doesn’t do anything in a short interval to prevent a more comfortable position.

However, this isn’t about design. This is about art making a statement and that’s why it won the award. This is a non-issue that can be dealt with through good manners. Let’s not forget that manspreading is actually beneficial on the dating market, as it’s part of human body language when it comes to finding a partner. While this might not be beneficial in a cramped subway, telling people to scoot over is a far more sensible option than intentionally discomforting them. Maybe next we need seats that auto-launch handbags that are left on vacant seats. 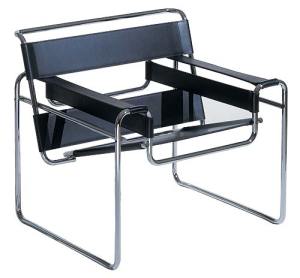 The whole point of statement design is to create something that wouldn’t be used but is intended to bring a topic to the forefront. The craftsmanship is often lousy and the end-product only there to be exhibited and discarded. In practice, these kinds of works have little to no value in themselves, only in the topics they intended to give a form to. It’s creating trash for the sake of the message. It’s useless waste of time and money for the sake making little noise that goes nowhere often about nonsense topics with little value. These are far from comparable to the classical arts, where events and topics were painstakingly painted on a canvas or chiselled into stone. Compare either of these to any venerated work, like Picasso’s Guernica, and you can see the difference. If a painting is too different a comparison, then use the Wassily Chair as a contrast of design that makes a statement about production and innovation. Marcel Breuer’s chair will stay a forever classic, ignoring pettiness of the world all the while innovating in material use and production. That in itself is a statement to be admired.