Kamachi Kazuma, a novelist for Dengeki Bunko most known for his A Certain Magical Index series was approached by Sega to commemorate the 20th anniversary of Virtual-On series with a novel. Their approach for Kamachi was to do a new sort of Virtual-On instead of just doing what had been done in the past, resulting in a cross-over novel. This was a sort of dream project for Kamachi, and at this point, it’s not longer just a dream, with A Certain Magical Virtual-On game released in early 2018.

A Certain Magical Index‘s first novel was released in April 2004, debuting Kazuma Kamachi as mainstream light novel writer, which also gained a popular animated series in 2008, and gets its third season in 2018. The series mainly takes place in a fictional city called Academy City, west from Tokyo, where science has advanced more than in the outside world. This city is of scientific marvels, making leaps and bounds to every which way. This means the city has constant testing of new technology and designs, including testing such things as weird soda drink flavours. The city is walled all around, protecting the valued assets and data, but also keeps other people out.

The most important project that’s running in Academy City is its espers. The city has around 2.3 million espers, all students who partake in Power Curriculum Program, which aims to attain one’s own Personal Reality in order to awaken esper powers. Personal Reality is essentially one’s own secular view on reality, able to affect the objective reality’s state through their own “power” to the system in microscale. Essentially an esper believes, if you will, that she can control electricity, and so she does. However, the Curriculum requires quite literal rewiring of the person’s brains through use of various drugs in all forms, various forms of hypnosis and suggestions, slight surgical manipulation of the brain, and different sensory deprivation methods. This rewiring effectively separates the students from reality, after which they may develop powers depending on their own reality. All these powers of course are not as potent as others, with some never manifesting any.

However, this is the science side of things, and the main story takes place in the magic side. Sorcerers mostly belong to different sects and religions of the world, and their magical power does not stem from being separated from the world, but rather from idol worship, where a system of rituals are prepared in order to invoke higher powers to grant supernatural effects on reality. This can range from creating golems to controlling wind with a tool. These are fundamentally different kind of power from that of an esper, and due to the sheer difference how the users’ are wired thanks to the Curriculum, an esper can’t use magic without physical trauma. Similarly, a sorcerer does not have access to espers’ powers, as they lack a Personal Reality.

Enter Kamijou Touma, the series’ main protagonist, who has the power to break down supernatural powers with his right hand. He has a rotten luck, which drops him into fights, causes him to lose money, or in one case, meet up with an English nun named Index, who is being chased. Due to circumstances, Touma is made Index’s companion, with the English church allowing him to accompany her despite the clear threat his right hand poses to them. Index is important asset to the world of magicians, as she holds Index Librorum Prohibitorum, a library of 103 000 forbidden books, in her head due to photographic memory and can recollect information from those pages. This places them both in a crossroad of events and situations, where both the world of science and magic collide with each other, often despite of them, sometimes because of their direct actions. 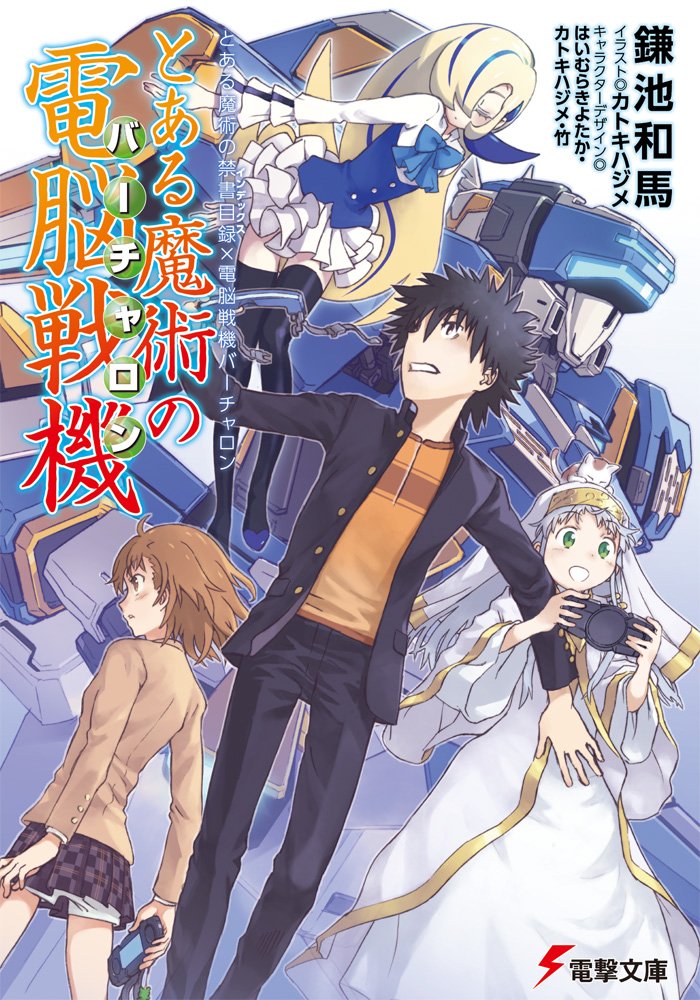 END_OF_DOCUMENT_TOKEN_TO_BE_REPLACED

In the early 2000’s, Sega’s plan was to deliver cheaper and more effective arcade hardware for the Japanese market, which of few would see worldwide releases. NAOMI 2 was given the emphasize over the Hikaru, which was phased out in 2002. NAOMI 2 would last to 2008, with Atomiswave, a Sammy developed NAOMI derivative, running by its side. Around the same time in 2001 Sega developed the Triforce with Nintendo and Namco, based on Nintendo’s GameCube. Two years later, Sega would release Chihiro to the arcades, based on Microsoft’s Xbox. All these arcade machines ran different games that Sega was directly involved and developed, like NAOMI 2’s Virtua Fighter 4 series, Triforce running AM2 developed F-Zero AX, Atomiswave running many fishing and fighting games Sega was part developer and publisher, and Chihiro most known for OutRun 2 and House of the Dead III due to their Xbox ports. Later in the 2000’s, Sega’s arcade hardware would be more or less completely home media derivative, based on normal PC architecture, making some of the modern games running on a modified Windows. However, there was no Virtual-On, on any of these systems.

With Virtual-On FORCE generally receiving lukewarm acceptance from the overall audience, regarding Oratorio Tangram the superior game, Hitmaker would develop a console-only sequel for the PlayStation 2; Virtual-On MARZ.

END_OF_DOCUMENT_TOKEN_TO_BE_REPLACED

Sega often had multiple arcade boards running at the same time and never really dedicated their library and efforts on just one board. For example, while the Model 3 board was developed to replace Model 2 and was introduced in 1995, Model still kept going until 1998 and was phased out only after NAOMI hit the scene. Furthermore, Sega had their System 21 running from 1987 to 1996, while their H1 system was barely a blip on the scene in 1995, with it being their last Super Scaler board and had only two games. Other companies, like SNK with Neo-Geo, emphasized the amount of games on a board for a more economic approach. However, Sega had made good business in the arcades with excellent selection of timeless classics, but as we saw with the Dreamcast’s end, all things must come to an end.

Sega Hikaru hit the scene in 1999, before Model 3 was phased out and after NAOMI was put into public use, the Hikaru is almost a high budget, envelope pushing hardware to NAOMI’s ties to more budget conscious approach. Despite being derivative of NAOMI technology, it was expensive to produce due to its chipset, and it was hard to code for due to its intricacies. It featured a custom build Sega GPU with advanced graphical capabilities, almost a standard for Sega’s flagpole systems, with additional CPU, sound and other custom processors that utilised the expanded bandwidth and memory. All this was partially to enable the Hikaru to do Phong shading, which was the most advanced shading technique of the time, which essentially calculated the needed colour per pixel, making triangles on a model seamless and allowed better specular highlights.

The Hikaru was developed almost exclusively for Brave Firefighters, a 1999 arcade game.

END_OF_DOCUMENT_TOKEN_TO_BE_REPLACED

Virtual-On was a relative success for its time. It saw most of its popularity in Japan due to larger availability of arcades and the Saturn doing better there than anywhere else. For America however, the success was much more limited. Less arcade machines to go around and Saturn’s lukewarm success were the main reasons. The PC version, much like other Sega’s PC releases, was less emphasized over their own console’s port. This lesser success seemed to convince Sega’s European section not to release the Twin Stick controller in the region. Despite how the game is considered a sort of landmark for Sega and mecha games overall among fans, that’s all mostly in retrospect. Its impact didn’t exactly topple any towers, and ultimately met similar niche status as Sega’s other Saturn seller title, Panzer Dragoon.

The decline of arcades, and Sega’s mismanagement of their hardware side (especially during Mega Drive’s later years and Saturn overall) limited Sega’s business success overall, with Sony taking their place as Nintendo’s main rival with the PlayStation. That is not to say that Virtual-On ended up being some sort of sales catastrophe, as Japanese arcade goers took the series close to their hearts. This being Sega, they gave more emphasis on this fact rather than considering the franchise’s world wide success.

Despite Sega Model 2 being a success on its own rights, Sega was always pushing their arcade hardware further. If Nintendo has an obsession to introduce 3D to home hardware, then Sega had an obsession to push the 3D hardware at arcades. Hang-On, OutRun and Space Harrier are all examples of 80’s Sega finding ways around to introduce 3D-like effect to their games, and you could even argue that Sega’s teams became master of sprite scaling in this fashion.

Sega didn’t cut much corners with their arcade hardware, and Sega Model 3 supports this approach, as it was the most powerful arcade system board of its era. As Sega’s last piece produced by their partnership with Lockheed Martin, it contained graphical hardware designed by Real3D and Mitsubishi, which was a spin-off company from Lockheed Martin. However, Real3D only saw success with Sega, and their partnership with Intel and SGI ended up as market failure, and in the end was sold completely to Intel in 1999 due to changed arcade markets.

The reason why Mitsubishi was brought into the partnership was Real3D had a series of delays with their GPU. Originally, the Model 3 was supposed to be released in 1995, but had to be pushed back to 1996, with Yu Suzuki claiming it would deliver the best 3D graphics thus far.

END_OF_DOCUMENT_TOKEN_TO_BE_REPLACED

This post is first in a series of five. You can access all posts in Robot Related Section linked above, or move between sequential post at their beginning and end

Virtual-On is one of Sega’s hallmark game franchises, developed by Sega’s AM3 department. It had everything the arcades required in 1996; 3D graphics that you wouldn’t see at home, unique controls, flashy graphics and fast paced gameplay. When most of the 3D mecha combat games on the market aimed for slow and emphasized on realistic simulation, like Shattered Metal or Mech Warrior 2, Virtual-On hit the arcades with sharp, colourful 3D models in fast paced third-person action with (relatively) easy controls. This is perhaps the best example of East VS. West mentality when it comes to giant robots. Even in arcades, among other blooming 3D games, Virtual-On stood apart with its excellent presentation and unrelenting game play.