I’ve touched this on multiple occasions before, but I still need to give it a single, emphasizing post: most robot franchises are there to sell toys. Transformers being the most prominent example of this, with the cartoon and comics supporting the toyline rather being a separate entities based on the toyline. Both the comics and cartoons had to adhere what Hasbro had to say, which resulted in death of numerous characters while loads of new ones being introduced in one panel. Writers can often try to tackle these as challenges, and while that has been less successful at times, it has given birth to a very rich franchise, with Beast Wars still contesting the place for the best written entry overall.

With Transformers, a lot of the things that goes in the designs can work in the toys, and sometimes Hasbro mandates things. However, that being said, Japan still likes to design toys first and foremost based on gimmick ideas to implement in the shows themselves. This is rather clear in modern Kamen Rider, where the themes and gimmicks have been decided beforehand and designed based on these. Sometimes, the concepts can be to counter previous seasons’ concepts, or based on research on what kids may like. The usual stuff really, and this is part of the whole research part when designing something for purpose use; find what it needed and wanted, and then fill those.

Studio PLEX is a company that is under Bandai Namco holdings, and their main task really is to design and realise toys. GoTaurus above is one of their creations for Gingaman, and does exhibit a lot of their design ideas from the get go. I’m sure everyone can see how its transformation is essentially just to stand up. The reason this is of course; toys.

Most, if not all, Studio PLEX designs are not driven by technology, lore or the like, the things I’ve been praising with harsh bias all year around. The very core their designs are driven is to make the toy sturdy for kids to play with, and to look neat and accommodate all the necessary gimmicks. There are no flimsy bits to bob around, no sharp corners to speak of to pop one’s eye out. Real world concerns for child safety and sturdiness have driven the design, but that has not not impacted it. Certainly, GoTaurus may not have the most interesting design, and the relatively low production quality of the toys often can demerit it, yet ultimately the design is very eye pleasing due to the used colours and shapes.

It is designed and build with intention. All the joints too are big and relatively heavy-duty compared to modern, more adult-oriented toys, where joints could be build from metal or have somewhat more complex design in a small build. Because the intent and use of Super Sentai toys is very different from what adults want to do with their toys, either just pose them on the shelf or hotglue them, there’s not much put into low-cost production and high sturdiness. At times, it feels it is the exact opposite, with high-cost productions with extreme detailing, but with even one hit or the like, the toy’s bust.

The A3 toyline of Tactical Surface Fighters from Muv-Luv Alternative is a good example how the toys were made with rather  high detail count and decent paint application, but everything else tended to be terrible.

This is, of course, because the TSFs were not designed to be toys in the first place, but that doesn’t necessarily mean their toys need to be terrible. The joints were designed from ground up, and ended up being very loose. The used plastic is either too soft and has warped, or lacks toughness and breaks easily. All these combined make the A3 line very flimsy, and knowing how to repair broken bits is pretty much required. As the line went on, some of these issues were fixed, but in the end the A3 was a disappointment. The franchise moved on to the Plastic Model field, but even there the TSF models were costlier and of lower quality than competition, especially when compared to Gundam models. That may be a bit unfair comparison, considering what sort of gold mine Gunpla is for Bandai.

Speaking of Gundam, while the series is know for its giant robots and relatively good storytelling in general, it should be noted that it is very much driven by its model sales above all. Adults and kids alike find building their own toys fun, after all. 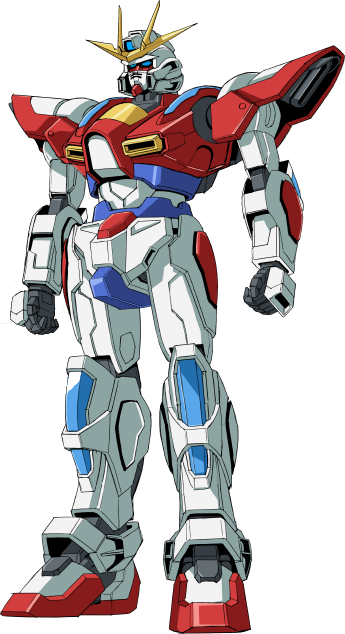 The one core thing that allows Bandai to roll out loads of different sort of varied designs like the above BG-011B Build Burning Gundam is the use of general use frames that you can slab armour on.

Bandai often reworks this frame. Certain series and eras themselves have a certain set frame, which may have an extra part to add a function or the like, but largely what makes the most difference in the model is its outside appearance. Part swapping is easy, as generally Bandai wants to make things modular within the series to a certain degree for their own benefit in mould reuse. It also makes kitbashing easier, when everything uses standardised parts.

Gundam as a franchise is freakish in the sense that it doesn’t serve the toys all the way, despite Bandai being the end-of-all being that dictates the final design. It allows the designers to work within the fiction, and this often results in a design that functions within pre-existing model limitations and fiction’s demands, as the paradigm in Gundam design emphasies using all three at the same time. Rarely you see a Gundam that could not be realised in model form, and even then it’s more common to see a modern redesign that makes them fit that box.

Gundam began to use transformations when the technology became cheap enough for it, and after Macross had made it popular. Looking at the current lineup of Gunpla, we can always see one or two models designed just around the shape changing gimmick. Thus, in a mainline Gundam show, the transformation has to work, toy accurate if possible. Because this mind set shifted only after later, mechas like Zeta Gundam had to come around its complex and nigh impossible transformation schemes (for toys) to the point of Bandai making a Zeta Model that, for in-universe reasons, had a simplified scheme. Namely, the MSZ-006 Zeta Gundam Wave Shooter Equipment Type. Nowadays, moel engineering and plastics have evolved to the point of pretty much anything is possible.

Though even when everything has become possible, it also has a cost. A simple design like with GoTaurus won’t cost too much to produce, but a more complex piece like a Zeta Gundam will due to complex mould needed. Considering the needs of the toy first yields a very much different design than considering the in-world or technological points. Toys, after all, exist.